Xiaoyi Niu, born in Shanghai, China. She has studied with the legendary Chinese pianist and pedagogue Ms.Leyi WU. She went to study in Paris at the age of 19 at France’s prestigious L’Ecole Normale de Musique de Paris with renowned pianists and professors such as Pascal GODART, France CLIDAT and Sergei MARKAROV. Xiaoyi holds a Master’s degree in Piano Performance from the San Francisco Conservatory of Music under the study with Professor Mack MACCRAY. She combines in her playing the romanticism and musicality of her Western European influences with the technical skill and discipline she began learning at the age of four. Since moving to the United States in 2004, Xiaoyi has performed as a soloist and in chamber music groups both on the East Coast and the West Coast, Europe and Asia.

Xiaoyi NIU has had over 15 years teaching students of all ages, all levels and diverse culture backgrounds. Her teaching approach is encouraging, engaging and energetic. She has been actively teaching in Short Hills, Millburn, Summit, South Orange, Livingston area in NJ for the past 6 years. Lessons can be taught in English, French and Chinese Mandarin. 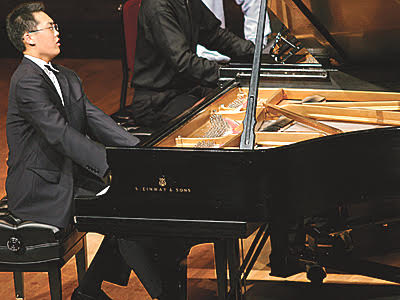 Jason JIA, a famous pianist, began his piano studies at the age of 3 and a half. At the
age of 7, he started to participate in the local piano competitions and won first place
for numerous times. He was admitted to the Affiliated School of Shenyang
Conservatory of Music in 1997 and won the second place in the third Piano
Competition in Northeast China in the same year. In 1999, he received a full
scholarship from the Music Bridge Summer Camp of the Royal Mount College in
Canada. Where he was taught by world famous pianist Lee Kum Sing and finishing
the summer camp with second place of piano competition, he joined Germany
Ettlingen International Piano Competition after and achieved fourth prize. Since
2000, he studied under Lang Lang’s teacher Yafen Zhu and obtained the fourth
place in the fourth Hong Kong International Piano Competition. At 2001, Jia
participated in Gina Bachauer International Young Artists Piano Competition, one of
the highest in the world in Salt Lake City, working with the Utah Symphony Orchestra
and won fourth prize. In 2002, he was invited by famous pianist Kong Xiangdong and
famous violinist Lu Siqing to perform in Hong Kong and Shanghai together. In the
same year, he was awarded a scholarship by China Yamaha Corporation for genius
pianists in China (six pianists were chosen in total). In 2003, he was admitted to the
Central Conservatory of Music with first place, at the same year he received a full
scholarship from the Oberlin Conservatory of Music and the Eastman Conservatory
of Music to continue his piano studies in the United States. In the summer of 2003,
he participated the Eastman International Piano Competition as the youngest pianist
and compete with pianists from well-known conservatories such as Juilliard school of
music and won first place. From year 2005-2007 he held many concerts in the
United States. At 2008 Jia won the Mozart Prize at Sty-thal. The famous pianists
studied and followed by Jia include: Lee Kum Sing, Guangren Zhou, Qifang Li,
Xiangdong Kong, Paul Pollei, Allen Chow, Gail Niwa, Thomas Schumacher, Douglas
Humpherys, Jerome Lowenthal, Seymour Lipkin.
Jia started teaching piano at the age of 16, and has profound experiences for
beginners, amateurs and professional piano students. In 2003, when Jia went to the
United States for further studies, three of his students were enrolled in the Affiliated
School of Shenyang Conservatory , and two other students of the same age as Jia
were admitted to the China Conservatory of Music.  Jia is teaching now in NY and NJ.

Pianist Xiyu Deng is currently pursuing Doctorate of Musical Arts degree under Dr. Joanne Polk in Manhattan School of Music. She is also a teaching assistant employed by Manhattan School of Music from 2018; teaches piano group classes and elective piano lessons for MSM graduate and undergraduate students. She began studying the piano at the age of five. She was awarded top prizes at the BNP Paribas ‘Rising Star’ Piano Festival in 2013, New England Conservatory Honors Competition in 2016 and the second prize in Open Class at the 17th Hong Kong—-Asia Piano Open Competition in 2012.As a solo pianist, she has performed extensively throughout Europe, Asia, Australia and the United States at the internationally notable concert halls, such as Merkin Concert Hall at Kaufman Music Center in New York, New England Conservatory’s Jordan Hall in Boston, and Forbidden City Concert Hall in Beijing. She pursued her Bachelor of Music degree in Central Conservatory of Music, as a student of Dr. Bo Tong and Master of Music degree with Mr. Gabriel Chodos in New England Conservatory.

Ms Deng teaches piano students of all ages and experience levels. She has taught private students for 10 years from age 4-adult or professionals. Some of them study with her from the elementary level. Her students pass the ABRSM exams and won top prizes in domestic and international piano competitions during the instructions. Ms Deng wishes her students to enjoy music at the moment they start to learn how to read the music. She believes developing a great technique is an essential part in learning the piano. Besides that, she likes her students to understand music as an art form, can be approached as a language, which each component of a piece, such as the melody and harmony, convey emotional meanings.

Frank Sole began his guitar studies at age 8 and has never stopped. He continued his studies through High School with Dan Bennen. He studied Jazz guitar with Wally Richardson and Classical guitar with Fred Dilzell at Rutgers University in Newark graduating as a classical guitar major with a K-12 teaching certification. After college he studied with the BeBop saxophonist Fred Amend while he freelanced with many bands eventually forming his own Jazz trio with his brother Mark on drums and a bass player.

Frank has continued to work with local Jazz groups often backing up Jazz singers and instrumentalists.

Combining his Yoga with guitar he has developed a course he calls “Guitar Yoga” which helps the student develop efficient practice habits and concentration.

He is also a songwriter and singer. He studies voice with Katie Talbot at the Brett Manning studios in Nashville Tennessee.